Sporting and other achievements

These year 5 pupils were amongst the team who recently attended a cricket tournament in Haverfordwest. All boys played exceptionally well with one making his debut appearance on a cricket pitch. The boys qualified to go to the finals day which is soon to be held again at Haverfordwest on Tuesday 27th June. Good luck boys!

A massive congratulations to all the year 5 pupils who auditioned for this years KS2 PDGT. Yet again the standard was exceptionally high and all competitors gave 100%. A special congratulations to 'The Twighlights' who came third place overall!

Da iawn pawb, a great achievement to every single one of you! 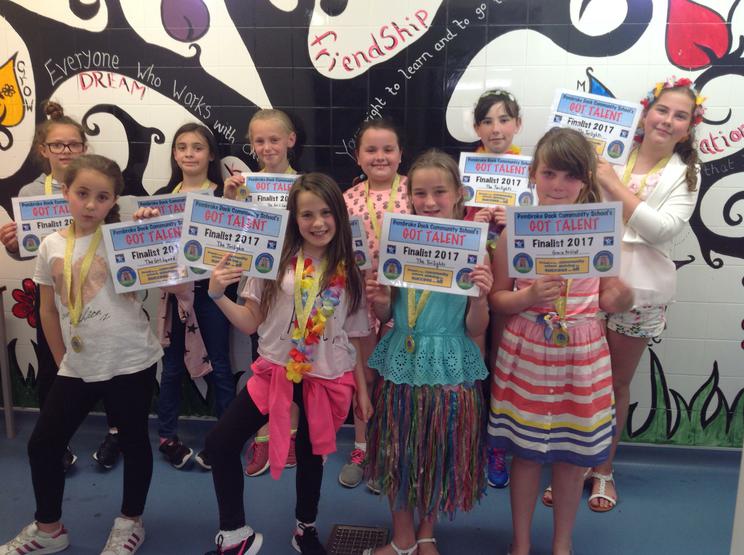 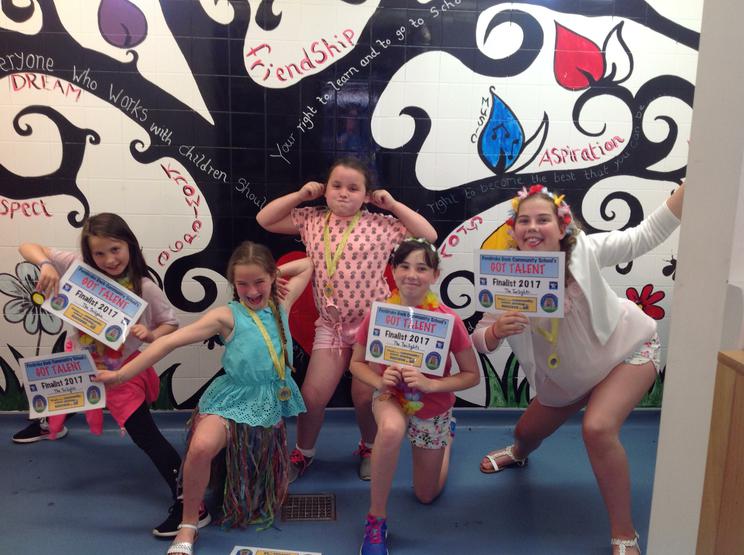 Ruby was our Year 5 representative who went to a cricket competition today against some other local schools! She gave 100% and played the very best that she could. Well done Ruby, you did us proud!

Our year 5 boys and girls attended a local tennis tournament today! Everyone played their best and enjoyed both the sunshine and the experience! Da iawn pawb!

A huge well done to the following year 5 boys for being selected to attend the recent Pembrokeshire County Schools football trials. All boys gave 100% and thoroughly enjoyed the experience.

A further congratulations goes to Bowyn Clarke who has now been selected to play for the Pembrokeshire Schools under 11s next season. Fantastic news, well done! 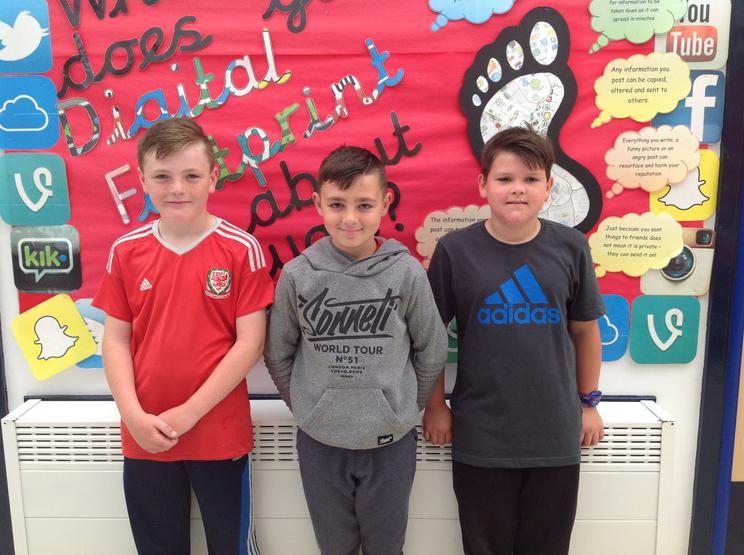 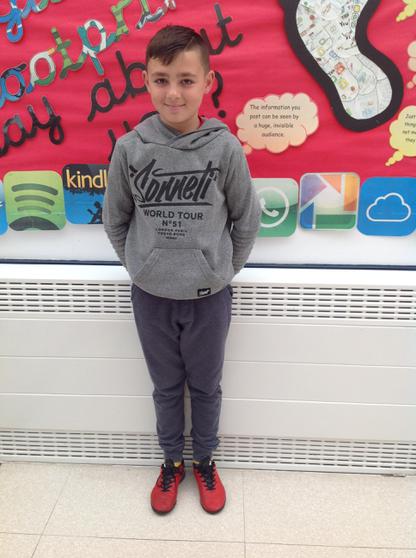 Year 5 and 6 boys and girls travelled to Tenby today to take part in the Urdd rugby festival. It was a challenging competition with 16 different schools from across Pembrokeshire. Both teams gave 100% effort in all of their games, all children played well as a team and showed great sportsmanship!  Well done all!

Year 5 pupils were part of the schools cross country team this week who went to participate in the county cross country championships in Carmarthen. With over 200 runners in each race the pupils ran exceptionally well and were a credit to the school! Well done all! 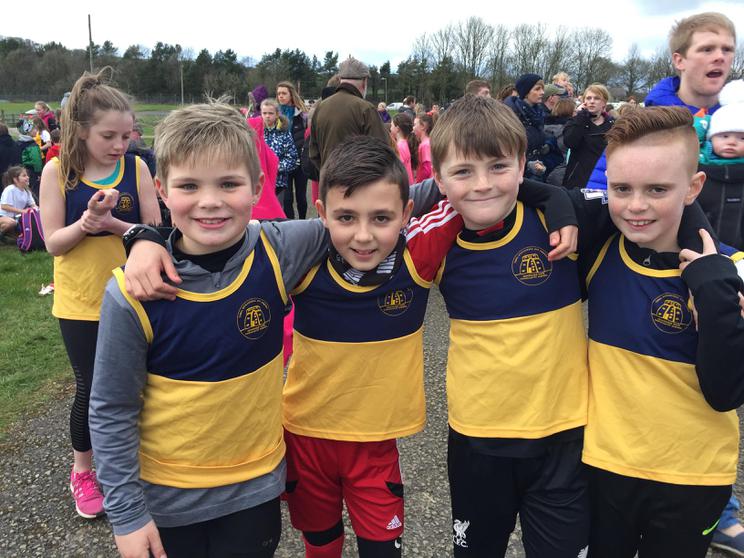 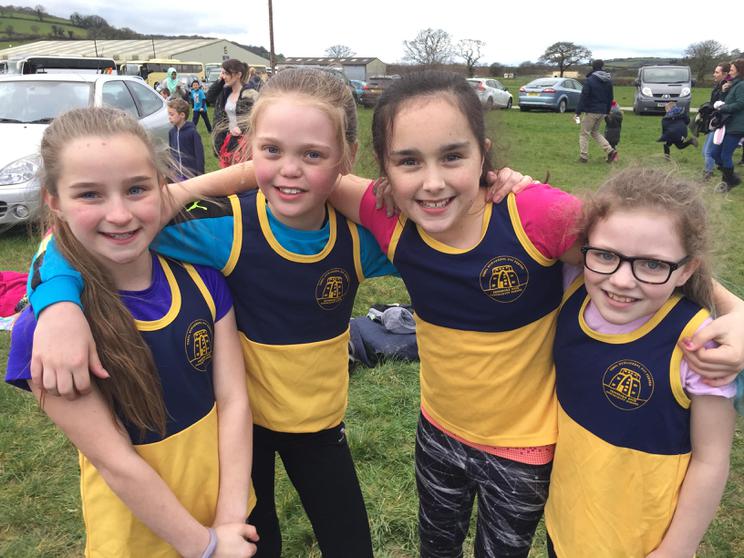 2 relay teams travelled to Haverwordwest today to represent the school in a relay swimming gala! The boys relay team was made up of year 5 and 6 children whilst the girls team had representatives from years 4,5 and 6. All children did the school proud and gave 100%. Well done all!

A small group of year 5 and 6 pupils represented the school recently at the Urdd swimming Gala held at Haverfordwest Swimming Pool. Pupils each took part in individual races of different strokes at 50metre distances and took part in the mixed relay. All pupils gave 100% effort in all of their races and did themselves and the school proud! Amongst their very respectable finishing positions and times was Caera from year 6 coming first in both of her individual races. She now goes on to the National Finals in Cardiff in January. Pob Lwc Caera!

A huge congratulations to the year 5 members of the cross country squad who took part in this weeks competition. All runners gave it their all and did tremendously well! We're super prod of you. Bendegedig!

Some year 5 pupils were just some of many today who went on a mystery trip as a reward for their outstanding commitment to reading throughout the summer holiday. The children having been excited about the trip and curious as to what was planned. The coach took them for a super day out to the Cinema to watch Roald Dahl's movie the BFG. For year 5 pupils there couldn't have been a better film, linking perfectly with our Author study of Roald Dahl! Much fun was had by all, well done, we're super proud of you!

A huge well done today to the year 5 children who went to the Hyndleton CVross Country competition to represent our school. All pupils gave 100% effort. Super running!

Pupils have been busy this week making posters and preparing speeches to persuade their peers to vote for them. We held the school elections for school council members this week and the names of the lucky candidates were announced in Friday's assembly. Well done to you all, we look forward to hearing how you are getting on with your new role, exciting stuff! Be proud of yourselves!

Following an inspirational weekend with Ironman Wales some of our year 5 pupils proudly show us their t.shirts and medals after competing in the Ironkids event! It was an awesome weekend all round and who knows, maybe we have many future Ironman competitors in the making here in Pembroke Dock. A big congratulations to all of you, a super achievement. We are proud of you all. Well done!

It was fantastic to kick off the new school term with children showing how busy they had been during the school holidays. With pupils achieving medals, certificates and other rewards for a range of activities from swimming, walking for charity and for completing a reading challenge! Da iawn pawb!

Unfortunately not the ones with chocolate chips.

Some cookies are necessary in order to make this website function correctly. These are set by default and whilst you can block or delete them by changing your browser settings, some functionality such as being able to log in to the website will not work if you do this. The necessary cookies set on this website are as follows:

Cookies that are not necessary to make the website work, but which enable additional functionality, can also be set. By default these cookies are disabled, but you can choose to enable them below: